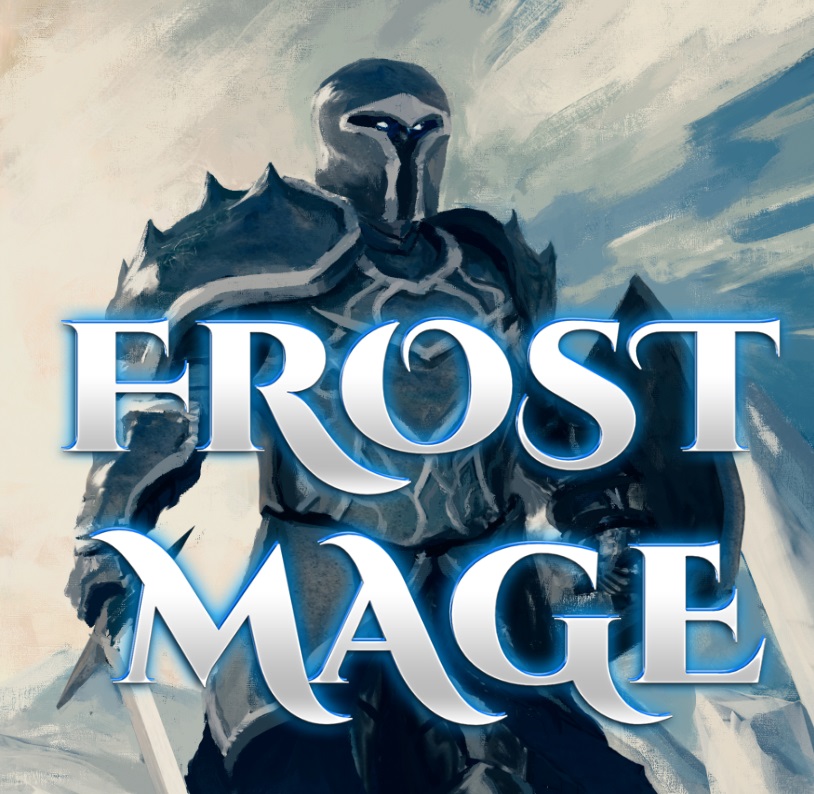 If you prefer to listen to this story, the first two chapters (only) are available on Soundcloud. https://soundcloud.com/atticusandrews/frost-mage-chapter-1

The woods are lovely, dark and deep,

But I have promises to keep,

And miles to go before I sleep,

And miles to go before I sleep.

Frostilicus Shatterblade, or Frost for short, craved it. Yearned for it. His mouth was completely dry, his body on the brink of collapse.

There was only one thing he needed more than anything.

“Any last words?” the rifle-bearing corporal said aloud in a gruff voice.

Frost couldn’t quite make out the man’s sentence.

“Very well,” the man said. “I hereby sentence you to execution by firing squad.”

If only there were water nearby, Frost thought. A lot of it.

“For the capital crime of the use of frost magic,” the corporal said, his final words containing an emphatic sound of contempt.

Frostilicus was bound hand and foot and stood alone. From his hanging head, his bruised eyes flitted upward, looking his executioner directly in the eyes. These men. These cruel men would kill him, dried out like a prune. They knew how to weaken him. How to destroy him.

“Men,” the corporal said, raising his right hand. A dozen Flintlock riflemen trained their sights directly on Frost. They had taken him out here to kill him. Execution-style with no trial. “Take aim.”

So this is how it would end? His life flashed before his eyes. His parents. His brother. This mission. This last-ditch mission to find the frost mages. The only ones who might be able to help.

But that didn’t matter now.

There was a rustle in the bushes beyond the squad. Frost shifted his gaze. In an instant, branches snapped, an entire tree bent over, and a huge thumping sound reverberated on the ground below.

The men jerked their heads.

Bursting out from the snowy evergreen forest was an enormous, 14 foot tall mammoth with menacing ivory tusks and shaggy brown hair covered in tangled branches? The beast ducked its head and charged directly at the Flintlock squad from behind.

The riflemen quickly fanned out in fear of being trampled by the oncoming beast. Their mouths gaped, and their eyes widened in momentary fear.

The twig-covered mammoth sprinted through the group, knicking one of the fleeing men with its tusks as it made its way toward its real target—Frostilicus.

Peering down from the top of the beast was the smiling face of his brother, Frolick. “Miss me?” Frolick said. “Molly here brought you a present.”

The woolly mammoth curled her trunk and released a refreshing blast of warm water.

“She’s been holding it in her trunk for a long time, so you better be grateful,” Frolick said matter-of-factly. “Told her not to drink none of it.”

As the water touched Frostilicus’ skin, he gulped, tasting the sweet water in his parched mouth. The water was life itself.

Right, Frostilicus thought to himself. This might be his only chance.

Breathing in, Frost focused his mind and pulled on the water, lifting it into the air. The droplets levitated above the ground like a flying carpet. Malleable. Transparent. Light moved through the aquatic blanket like a globular prism of shifting color. He just had to will it to take a form that he had studied. But what?

There wasn’t any time to be clever, so he acted on instinct.

The water moved quickly like a triggered hunting trap. It snapped into place like molten metal cast into a mold and instantly cooled. The water covered Frostilicus’ body from head to toe and then froze.

Frozen patterns wove across the newly plated armor like the mosaic of a skilled artisan. Geometric shapes that looked like something from another world grew and expanded in a patchwork quilt, containing deep mathematical secrets.

As the water hardened to ice, it crackled, giving off a white mist. Only Frostilicus’ shadowy form rose from within the fog, cold blue eyes piercing through.

“Get him,” the gruff voice of the corporal said. “Kill the frost mage.”

As the steam departed, Frostilicus emerged looking like an ancient king, wearing armor fit for a god. His helmet was topped with icy spires that jutted into the sky. His celestial, hulking form would leave nightmares scared. And his two-handed frost blade was large enough to slay a giant.

The men unloaded a volley of bullets directly at Frostilicus, peppering his frost armor with balls of ironshot. They didn’t pierce. Frost forms took on the characteristics of the things upon which they were based.

And this armor had been designed as steel.

“Reload,” the same voice said. “Finish him where he stands.”

Blue eyes glowing, Frostilicus charged. He raised his frost sword and ran at the men. Use of his powers granted him supernatural strength and speed. He leaped forward swinging his two-handed blade and slicing in half the rifle of the nearest Flintlock soldier.

A second man raised a gun and set it point-blank at Frostilicus. At that range, he just might pierce, but Frostilicus sidestepped, grabbing the rifle as he did. He lifted it up and rammed it into the man’s arm, knocking him to the ground.

Meanwhile, Molly barreled into a pair of soldiers, knocking them over while stomping over the legs of one. The man yelled in agony. Then the beast jerked her head and managed to snag the trousers of a third solder. She flicked her head, sending the man flying into a heap.

“Good girl,” Frolick said. “You’ll get a special treat for that one. Style points.“

Frost’s head snapped back as a bullet slammed into his helmet. The sound of metal hitting metal echoed through the evergreen forest in a resounding gong.

Frostilicus stumbled, falling backward onto his rear as his head throbbed in pain. His eardrums rang loudly as all other sound was drowned out. His sword fell to the ground, inaudibly clanging against a rock.

Holding a rifle pointed directly at Frost was the corporal. His face was grim and serious. His eyes narrow. His teeth clenched. “Die, frost mage scum.”

Frost could only read his lips, but he got the picture.

He gathered himself. His posture straightened as he lifted himself back up, grasping the hilt of his sword.

“He ain’t no god,” the corporal said, retrieving something from his belt. “I’ll show you a god.” The corporal withdrew his dueling sword.

Two more rounds of musket-fire slammed against Frostilicus. He brushed them off. He had formed his armor well.

The corporal lunged, his dueling sword clasped firmly in both hands. Frostilicus recovered himself just in time to block with his own blade. Compared to the frost blade, the corporal’s sword was a puny thing.

Frost’s glowing blue eyes pulsed brighter as he stared down the corporal from over their crossed blades. Then he whispered raspily, “You’re too late, soldier.”

Frost pushed back hard on the blades and then kicked, his frost-metal boot slamming into the man’s gut and sending him tumbling to the ground. He thought he made out the crunch of broken ribs. The corporal moaned in agony.

Molly trumpeted her brown trunk and flicked her tail as she prepared for another charge at the soldiers. “Giddyup,” Frolick shouted from up top.

The soldiers weren’t quite sure what to make of the shaggy creature. The Northern Reach wasn’t exactly in the heart of the Flintlock Empire. Mammoths were a sight to behold.

“Retreat,” a soldier said, panic in his tone. He turned around and ran at a full sprint.

It wasn’t long before the others followed. Even the injured corporal staggered off, clutching his ribs.