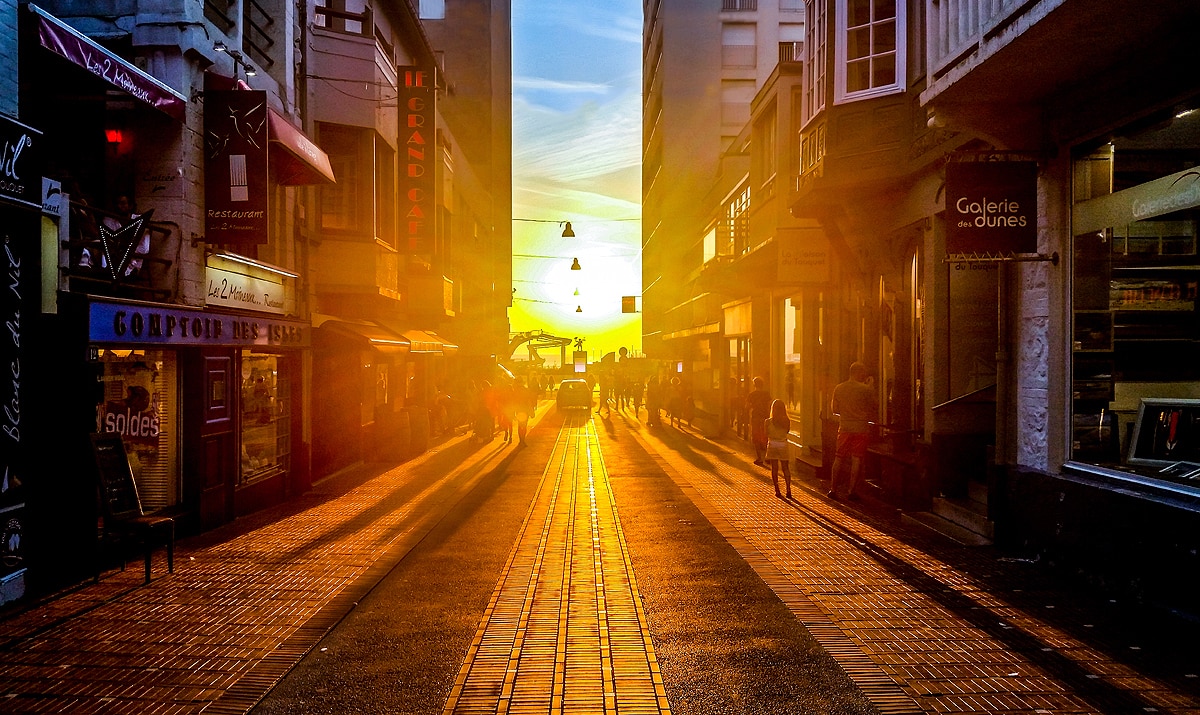 The bells rang, gongs sounding like angelic choirs signaling the dawn of a new era. Back and forth, the sound of the looming instruments vibrated the air with each rhythmic beat. He felt the vibration inside his chest, matching the thumping of his heart.

Each time the tongue of the bell struck its side, Clement felt the entire building undulate. The sound was unifying as much as it was hypnotic. The thousand and one faithful standing inside the Cathédrale du Sacré-Cœur were as one. Clement felt that he was a part of something bigger than himself.

Near the back of the cathedral was a semicircular recess called an apse. It was coated in stained glass windows depicting heroes of a bygone era. At its apex was a clear circular window that only showed the open sky.

Gradually, the gentle vibrations of the bells were joined by rays of light that poured down from the windows surrounding the apse. The rays shone down on the altar at the center of the enormous cathedral. The altar was immediately enshrined in a beautiful weave of luminescent, colored light – blue, green, gold, red, and white. The light seemed to dance, shimmering as it flowed in from up above.

His heart thumped. It was louder now, and slower. Time slowed with it.

Clement knelt down as the holy pontiff stood before the altar, raising the sacred host above his head. It was a small, circular piece of bread, transubstantiated into the holy of holies.

The faithful in the audience genuflected as did Clement. His knees hit the ground in slow-motion as his mind raced on. This was the most important day of his life. The day of his ordination. The day he would begin his new life as a shepherd of the faithful. The day he’d longed for, spent years pining for.

In that moment, Clement thought he saw something in the light. He wasn’t sure how that was possible, but it was. The light shimmered and then curved. Dancing.

But dancing to what?

The sound of drums, trumpets, piano, and instruments he’d never heard before joined together in a magnificent celestial orchestra. The high-sounding music was grandiose and yet perfectly pitched. It bobbed and weaved like water flowing over curving rapids before tossing itself down the Great Falls.

Soon the instrumentals were joined by a choir of human-sounding voices. Yet they were too flawless to be human. Were they? The voices sang in a synchrony that could only have been sent from heaven above. There were a mix of pitches – high and low voices that performed their various parts like colors in a tapestry woven together by a master artist. As they sang, hundreds of bright figures clothed in white, silken robes floated down, walking down the waves of light as if they were physical paths.

Clement saw the images of hundreds of saints and angels surround holy pontiff. No, not the pontiff. The sacred host raised high above the pontiff’s head. The host was merely a small pendant-sized piece of unleavened bread. And yet so much more.

The Church triumphant – angels, archangels, cherubim, seraphim, and saints all sang out. There were too many to count. These angels looked nothing like the pictures. They were far more grand, far more noble, and far more strong. These weren’t the effeminate, whimsical things that artists depicted. While some angels did have a feminine beauty to their appearance, others looked far stronger than any living man or beast. Still others were dark and gothic, almost like the gargoyles atop the Cathedral itself.

The saints came too -those who had gone before. Some Clement thought he recognized some of them from stories. They came from all walks of life and all races. What most surprised Clement, however, was how ordinary they looked. There were a handful of prophets, missionaries, and martyrs to be sure, but the vast majority of the saints looked just like normal people. There were carpenters, maids, potters, bakers and servants. Yet each of them shone with a radiance that made the sun look dim in comparison.

Clement looked around him. Were others seeing this? The rest of the audience were bowed low with their heads down. Unmoving. Frozen in time. Clement meanwhile was wide-eyed and mouth agape. What was going on?

He was sure he saw it even if not physically so much as in his mind’s eye. Yet they were there.

The chorus of figures raised their voices together in an eruption of song that twisted and curved in the air like colorful streamers whirled by dancers from the Far East. The elegant melody carried an eternal weight that penetrated deep into Clement’s mind. Into his soul. Calling him.

No, not now. He couldn’t be. Please God, not yet. I want to be ordained.

The holy pontiff’s image was frozen in time, staring wide-eyed in adoration at the sacred host. It was the last image Clement held in his mind before he died.

In that instant, Clement’s heart stopped.

Was he in heaven?

Clement blinked, then he rubbed his eyes. Was he still alive? But where was he? He wasn’t in the cathedral. Was he even in France?

A notification popped into his view.